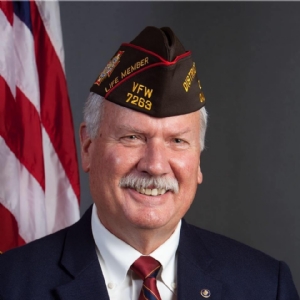 Greetings Everyone, my name is Steve Curtin. It is my honor to be serving as Post Commander of Tres Pueblos VFW Post 7263. I grew up in Southern California in the city of Hawthorne with 2 brothers and 3 sisters. I enlisted in the US Army in 1966, and 2 years later arrived in Vietnam. My position was Army Aviator and Flight Platoon Leader flying Ch-47 Chinook helicopters. After that tour I held a variety of leadership and staff assignments in aviation, aircraft maintenance/test pilot, and traffic & transportation management. I retired from active military service in May 1986. My military Awards and Decorations included the Legion of Merit, Distinguished Flying Cross, Bronze Star, 2 Army Meritorious Service Medals, 21 Air Medals, 2 Army Commendations Medals, the Presidential Service Badge, Master Army Aviator Wings, and various overseas medals. For the next 25 years I worked in aerospace, first with Northrop Corporation now Northrop Grumman, and then in 2000 with Lockheed Martin where I retired in the fall of 2011 and where I met my current wife, Carolee. I am fortunate to have had 3 children and 3 stepchildren plus 7 grandchildren. My oldest son, Matthew, aged 48, passed away unexpectedly in late June 2018. My wife, Carolee, and I happily reside in Scotts Valley, Ca. I became a Life Member of the Veterans of Foreign Wars in 1991, but work and family commitments kept me from becoming an active member. In 2013 I transferred into Post 7263 where I immediately became the Post Quartermaster, a position I held for 7 years until becoming Post Commander. At the District level I have served as Junior and Senior Vice Commander and as District 12 Commander for the 2016 – 2017 year. Subsequent to that I have served as District 12 Inspector, a position I still hold. For the year 2021 – 2022 I have been appointed the LE/FF/EMT Chairman for the Department of California. Please keep our nation’s veterans in your thoughts. They answered the call to our Nation years ago to serve and protect each and every one of us and are still doing so all these years later. In Comradeship, Steve Curtin