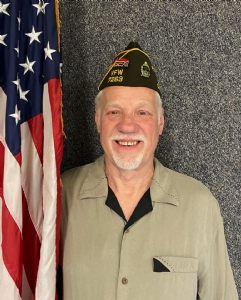 Hello.  It is an honor to be Chaplain of VFW Post 7263.  We are fortunate to have great leadership and dedicated members who have kept our Post active for over three quarters of a century!

My father was a minister, and my grandfather was an evangelist and minister.  My sister has a PHD in Theology and has ministered to tribes and congregations in Africa.  My own experience in the church includes appointment to deacon, but I am not currently affiliated with any specific church or denomination.  The VFW chaplaincy is non-sectarian, and our duty as chaplains is to minister to our comrades, regardless of their beliefs.
I was born in Texas and grew up in Northern California and Oklahoma.  I graduated from Grove High School in Grove, Oklahoma in 1964 and attended Northeastern Oklahoma A&M Junior College.  Then I joined the U. S. Marine Corps in 1965.  After boot Camp at MCRD in San Diego, California I had second Infantry Training at Camp Pendleton.  My specialty training was at Naval Air Training Center, Memphis.  My field of training was Avionics (Aircraft Electonics).
In 1967 I was in Vietnam with the Ugly Angels helicopter squadron HMM-362, which at the time flew Sikorsky CH-34Ds.  My tour of duty in Vietnam ended in 1968 during the Tet Offensive.  My duty station assignments included MCAS El Toro California, Camp Hanson Okinawa, LPH-3 USS Okinawa off the Vietnam coast, MCAF Ky Ha Vietnam, Phu Bai Combat Base (Camp Hochmuth) Vietnam, and MCAS Iwakuni Japan.  I received an honorable discharge in 1969.
After 4 years in the U. S. Marine Corps, I returned to civilian life.  I worked in the Silicon Valley tech industry in California before working for defense contractor GTE Sylvania, which later became a division of General Dynamics.  As a defense contractor, I supported programs at many domestic and overseas military bases and government sites.  After 26 years of service in the Defense industry with GTE and GD, I retired in 2007.  In 2016? I joined the VFW Post 7263.  With all the great experiences that I and my family have experienced at Post 7263, with comrades, family and friends, it now feels like a second home.  I am now looking forward to the future of our Post, and hope and expect it to continue serving veterans through the next quarter century and beyond.